At last... after years of pondering the mystery of who was the mother of Thomas Hughan's two natural daughters, Jane and Margaret, the answer has presented itself in a batch of newly released Jamaican church records.
I was correct in my  theory that the girls were born in Jamaica during Thomas's time there, and that their mother was of coloured ancestry. The baptism entry of the first daughter of Thomas Hughan and Margaret Hook ( below) reads "Baptisms in Kingston 1793. Jane, the daughter of Margaret Hook, a quadroon woman, by Thomas Hughan, was born 14th April, 1792, and baptised 23rd June, 1793."

The following year, when younger daughter Margaret Hughan was baptised, Margaret Hook was described in the church record as being "a free mulatto woman". By definition, a 'mulatto' was an individual who had one black parent and one white parent. A 'quadroon' was the child of a mulatto parent and a white parent.
Margaret Hook's father was a white merchant, Duncan Hook, whose relationship with a mulatto woman, Elizabeth Duncan, resulted in a family of three daughters and four sons. Duncan had to have a special Act of Assembly passed to give his mistress and their children the same legal status as English subjects in Jamaica. It was granted on 21st of December, 1776:

"An Act to entitle Elizabeth Duncan, of the parish of St Elizabeth, in the county of Cornwall, and island of Jamaica, a free mulatto woman, and Elizabeth Hook, Mary Hook, Margaret Hook, Henry Hook, William Hook, Thomas Hook, and John Hook, the reputed children of Duncan Hook, merchant, by the said Elizabeth Duncan, to the same rights and privileges with English subjects, under certain restrictions."

This also allowed Elizabeth Duncan and four of the Hook children to be buried in St John's Parish Church yard, St Elizabeth parish, Cornwall, Jamaica, with their husband and father Duncan Hook.

Above: The baptismal entry for the baptisms of Margaret and William Hook, children of Duncan Hook and Elizabeth Duncan. Elizabeth Duncan was also baptised on the same day, and it was noted that she was aged " about 26 years".

Above: Baptisms of Thomas and John Hook, sons of Duncan Hook & Elizabeth Duncan.

Above: Baptism of Charles Hook, son of Duncan Hook & Elizabeth Duncan.
DUNCAN HOOK, MERCHANT.
Henry Hook was the father of Duncan Hook. He was a small-scale manufacturer who lived in Scotland in the 1700s. His five sons all left Scotland to pursue their fortunes:- John ( born 1745) went to Virginia in 1758 as a 13 year old, apprenticed as a shopkeeper and clerk. Three sons, including Duncan and Charles, went to Jamaica, and another joined the East India Company. The five Hook boys were all well-educated and filled with the desire to earn their fortunes and return to Scotland to live comfortably.

Above: Marriage of Duncan Hook and Isabel Duncan, 1737,parish of Queensferry, West Lothian.
The following was taken from "Sally Hemings and Thomas Jefferson: History, Memory and Civic Culture", edited by Jan Lewis and Peter S Onuf:
"In the islands, masters openly lived in unions with slave women and often provided for their mulatto children. In Edward Long's condemnatory words, white men tended to "riot in goatish embraces". Black concubinage was part of the fabric of the social landscape. The magnitude of the difference between mainland and island is captured in Virginian merchant John Hook's ruminations about his brother, Duncan, then resident in Jamaica. In a 1779 letter, John writes metaphorically of Duncan's fall from grace, a "blot" on his "escutcheon" of a "ship wreck" that is "not only disgraceful but in time will be a bitter sting to all those gentlemen who forms such connection." The practice of establishing an interracial family is "too fashionable in Jamaica" he continues "and is held in deserved contempt universally through this continent". Despite his strong feelings, however, he will not press the issue with Duncan from "motives of delicacy", not meaning to "upbraid or insult his weakness." He is aware of the predicament of a man rearing a family "of whom he is ashamed" and yet "where his affections undoubtedly is placed". The ties of nature "binds mankind", John knows, "in spite of every effort to the contrary". But, he declares, any man with "a single spark of sensibility" will forever rest uneasy, thinking "how much better it would have been for him to have married a white woman."
Thomas Hughan, upon his return to England, was never made suffer socially by the existence of his two illegitimate daughters. He was elected to parliament, and made an excellent marriage to the daughter of a wealthy business acquaintance. His daughters, Jane and Margaret, resided in Scotland rather than with him in London, but their existence was certainly not hidden from society.
18th century almanacs for Jamaica reveal that Thomas Hughan held some important positions during his stay on the islands :
1790 Almanac: Militia of Jamaica Foot. St Elizabeth's Regiment. Westmoreland Regiment: Ensigns:...Thomas Hughan....
Royal Gazette, November 22, 1794, Kingston, Jamaica, West Indies: The following gentlemen have been sworn into the commission of the peace for this parish:  ...Thomas Hughan...
1796 Almanac Jamaica Lists: Magistrates for Surry, Kingston.Assistant Judges: Thomas Hughan (one named of fifteen)
Fire-Wardens: Thomas Hughan (vice-president)
Wolmer's Free School (established May 21, 1729): Thomas Hughan one of the trustees.
1799 Almanac Surry. Magistrates for Surry, Kingston...Thomas Hughan.......


Of the Hook family, the following is known:
Elizabeth Hook: raised a family of children with merchant William Bawn: 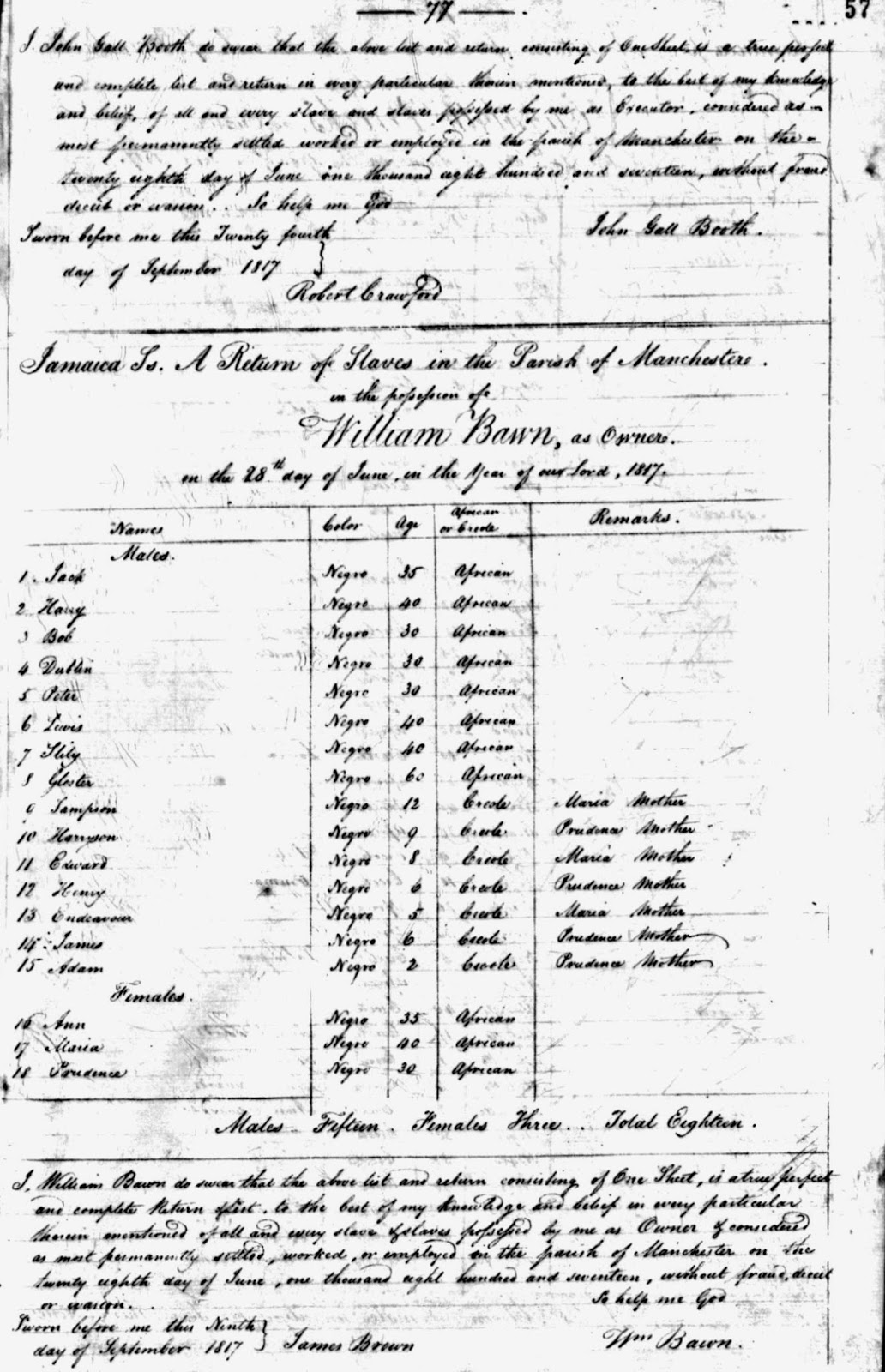 Above: From 'Monumental Inscriptions of Jamaica' by Philip Wright.
The death of Thomas Hughan's mistress Margaret Hook has not been located in either Jamaica, Scotland or England, so it is unsure what became of her. Thomas was back in England by about 1797- his daughter Jane would have been aged about five, and Margaret about three.
It was quite common for Englishmen to bring their natural-born children- particularly sons- back to England when they quit the West Indies for whatever reasons. It is not known when Thomas Hughan's daughters left Jamaica to take up residence in Scotland- probably with the Stirling sisters in Edinburgh who were cousins of their father.