Back to the children of Peter Hughan and Jessie Forsyth 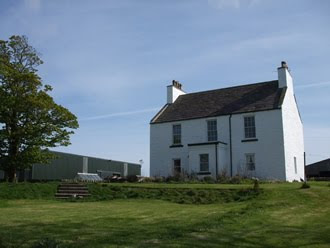 Above: Cults Farm House, Garlieston, parish of Sorbie, Wigtownshire, which was the home of Peter Hughan and Jessie Forsyth in the 19th Century.

Despite Peter Hannay Hughan being the fourth son of Peter and Jessie Hughan, he was the son who continued on the running of the family farm at Cults after the death of his father.
Peter Hannay Hughan was born in Minnigaff, Kirkcudbrightshire, in c. 1839, the fifth child and fourth son born to farmer Peter Hughan and Jessie Forsyth. His early years were spent at Meiklecarse Farm at Minnigaff, then the rest of his life at Cults farm at Garlieston near Sorbie.
At every census return from 1851 to 1901, Peter Hannay Hughan was living at Cults Farmhouse. He had an interest in the local militia, as the following shows:

Peter Hughan Senior died in 1877, and as sons William, Samuel and Alexander were all living abroad, Peter Hannay Hughan was named executor of his father's will, with the responsibilities of taking care of the farm, his widowed mother and unmarried siblings who still lived at Cults.
In 1891, Peter Hannay Hughan was head of the household at Cults,living with brother Andrew and sister Annie.

In Yorkshire on January 10, 1901, at the age of 68 years, Peter Hughan married 31 year old Elizabeth Taylforth Harper, and took her back to his farm at Cults. They had two children that I can find...

Peter Harper Hughan born October 22, 1903, at Cults, at three o'clock in the afternoon.

Elizabeth Hughan, Peter's wife, died at the age of 46 of cardiac vascular disease, of several months duration. She died at Cults on August 20, 1914, at 10:20 p.m. Her husband Peter was informant on her death certificate, stating that her parents were Samuel Harper, horse dealer, and Mary Harper, M.S. Hall (deceased).
Her children were only aged 13(Jessie) and 10 (Peter). Their father lived a further five years, passing away on June 18, 1919, at Cults, aged 81 years, of 'general debility'. His 18 year old daughter Jessie registered his death.
Jessie Forsyth Hughan married Herbert William Butler. I have found no trace of what happened to Peter Harper Hughan.


6. MARY ANN 'ANNIE' HUGHAN: was born in Minnigaff, Kirkcudbrightshire, in c. 1841.She was known always as 'Annie', and grew up on Cults Farm at Garlieston. Annie never married, and lived most of her life on Cults with her mother and brothers.She is found there on every census return until 1901, when she was visiting with John and Martha Forsyth, presumably relations on her maternal side, at Whithorn, Wigtownshire. Her brother Peter had only married a few months previously..perhaps she was giving the couple some 'space' (even though Peter was almost 70 years old!)
Annie Hughan died on April 2, 1919, at Garlieston, of breast cancer, aged 76 years. Her sister-in-law, Elizabeth Ewart Hughan (wife of Annie's brother William Henry) registered her death.


7. JOHN FORSYTH HUGHAN: was born at Minnigaff, Kirkcudbrightshire, c. 1843, the seventh child and fifth son born to Peter Hughan and Jessie Forsyth. I had initially believed that John had lived his entire life at Cults Farm, last appearing in the 1871 census return as a 28 year old living with his parents and siblings Peter, Annie and Andrew. The downloading of his will, however, gave evidence that he in fact moved to England and worked for a time as a book keeper in Runcorn, Chestershire, during the 1870s.
In about 1878, a year after his father died, John Hughan contracted phthisis pulmonalis, a term originally used to designate a wasting of the body associated with disease of the lungs. It would have been a terrible way to die...TB seemed to consume people from within with its symptoms of bloody cough, fever, pallor, and long relentless wasting.
John Forsyth Hughan died on March 7, 1879, at Cults farm, aged 36 years. His occupation was 'annuitant', John having benefited from a bequest in his father Peter's will in 1877.
John Forsyth Hughan made his own will on April 18, 1877, whilst living at Wilderspool Terrace, Warrington, Chestershire. His English estate was valued at 1,127pounds, including houses he collected rent from in Trentham Street, Runcorn, and he made his mother, Jessie Hughan, the sole beneficiary and executrix of his will.

9. ANDREW McKEAND HUGHAN: The ninth and final child born to Peter Hughan and Jessie Forsyth, Andrew was named after his brother whose death occurred almost a year to the day before his own birth...the first baby Andrew died April 20, 1849, and his namesake was born April 21, 1850. He was the only one of Peter's and Jessie's children to be born at Cults Farm in Garlieston, his family having taken up the lease and moved there just prior to his birth.
Andrew lived his entire 44 years at Cults, described in various census returns as either "Farmer's son" or, after his father's death, "farmer's brother". In 1891, which was the last census return he appeared in, Andrew was noted as being an 'invalid'. When he died in 1894, it was from a "chronic ulcer of left leg- seven years duration". This means Andrew would have been invalided since about 1887, at the age of 38.
Andrew McKeand Hughan died at Cults Farm on September 6, 1894, at 9:30 P.M. His brother William Henry Hughan, who had returned from Canada to live back in Scotland, registered Andrew's death.

Here ends my knowledge (thus far!!) of the family of Peter Hughan and Jessie Forsyth. Now to turn my attention to his brother, William Hughan...
at June 15, 2010