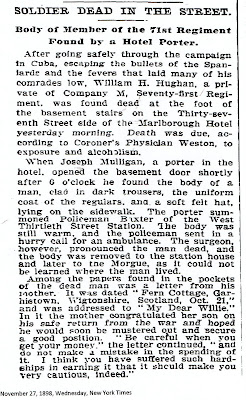 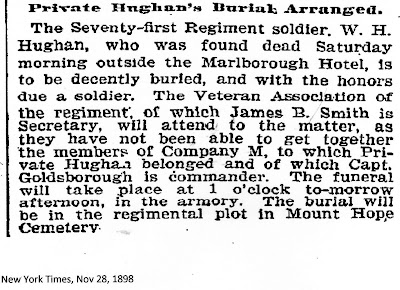 I had the above newspaper articles for several years before just this week I positively identified which branch of the Hughan family this poor soldier belonged to.
He was William Henry Hughan, born Collingwood, Victoria, in 1861, the only son of William Henry Hughan and Elizabeth Ewart.He moved with his parents from Australia back to Scotland and then on to Canada, where I lost trace of him after the 1881 census as he didn't return to Scotland with his parents in the 1890s. He doesn't appear in the census returns for 1891 for England, Scotland or Canada, so William may have moved down into the United States where he joined up with the 71st Regiment.
Following is a brief history of the Regiment during the time that William Hughan would have served, as taken from http://dmna.state.ny.us/historic/reghist/spanAm/infantry/71stInf/71stInfMain.htm

"The 71st Infantry Regiment was the first of twelve New York State National Guard infantry regiments that were federalized for service in the Spanish-American War. The 71st Regiment was originally composed of ten companies with 100 men apiece.This regimental structure was changed to a twelve-company format for duty in the Spanish-American War.
The regiment was entirely recruited from New York City and had previously served with distinction during the Civil War, participating in the Gettysburg campaign among others.It also participated in the switchmen’s strike in Buffalo of 1892, and the motorman’s strike of 1895 in Brooklyn. The regiment was mustered into federal service and designated the “71st Regiment Infantry, New York Vols.” on May 10th, 1898.
Early on the morning of May 13th the 71st embarked on transports at Long Island City, bound for Tampa, FL. Due to the suspected presence of Spanish ships in U.S. waters, the troops were unloaded and put on trains, which departed for Lakeland, FL on the 14th, much to the irritation of the officers and men of the 71st. The trip was uneventful and the troops arrived at Lakeland, 35 miles from Tampa on the 17th of May. They immediately set up camp alongside the 2nd Massachusetts and began a routine of drill and maneuver. On May 31st, 1898 the regiment departed their camp at Lakeland via train and headed south to Tampa Heights, where upon arrival the men and equipment were incredibly disorganized by the incompetence of the quartermaster staff requiring much time to sort out the confusion. After one week at Tampa Heights, the 71st entrained for Port Tampa where transports awaited to take the regiment to Cuba. During this time the regiment was attached to the Fifth Army Corp. The 71st Regiment spent over two weeks at sea, putting ashore near Santiago, Cuba during the night of June 23rd, 1898. The regiment splashed ashore at the little town of Siboney, sixteen miles east of Santiago carrying three days rations and 100 rounds of ammunition per man.

On the morning of the 24th, shortly after landing the 71st was ordered to support the 1st United States Volunteer Cavalry, more commonly known as Roosevelt’s Rough Riders, which had advanced into the hills in pursuit of Siboney’s garrison. The cavalry troopers fighting dismounted, had stumbled into a body of Spanish troops and were hotly engaged in the first army engagement on Cuban soil at Las Guasimas. Much to the disappointment of the men, it was soon apparent that the 1st Cavalry needed no assistance and the 71st was recalled to Siboney. On the 27th of June the 71st Regiment began its march toward Santiago, following the 6th and 16th U.S. Regular Infantry Regiments with which they had been brigaded. The brigade made around five miles on the poor Cuban roads and halted for the night at the town of Sevilla amidst the debris of battle from Las Guasimas. The Spanish had retreated to their fortifications at Santiago and a small well defended town called El Caney, but heavy rains had turned the already poor roads into a bog making immediate pursuit very difficult. The entire brigade was held up for several days until on June 30th it was announced that the units would be moving out early to engage the Spanish army.

On July 1st, 1898 the largest and bloodiest battles of the Cuban campaign were fought for possession of Santiago. Santiago itself sat among a collection of hills and mountains bristling with Spanish fortifications. Over the course of five years the Spanish had built up a system of defensive trenches and blockhouses among the hills that had few rivals. Their defensive line extended for three miles, starting with San Juan Hill in the South and proceeding north in an unbroken line of fortifications terminating at the sea. The 71st and the two regular regiments toiled along the small thin mountain road that led to San Juan Hill having been proceeded by the Rough Riders. The firing along the road was severe and the Spanish troops concealed in the heavy thickets used a smokeless powder, which made their positions very difficult to discern. Their sharpshooters were concealed in many of the tall coconut trees along the path and their artillery from the hills poured fire onto the road, which they knew the U.S. troops had to use.

The fighting for possession of San Juan Hill itself degenerated into a series of successive charges by individual regiments, battalions, and companies. Among the units to reach the top first were the 6th, 13th, 16th, and 24th Regular Infantry Regiments along with Company F of the third battalion of the 71st Regiment. Much of the rest of the 71st was also heavily involved in the fighting sustaining heavy casualties in the face of galling Spanish rifle fire from a system of blockhouses on the right side of the hill. Shortly after the fall of San Juan hill the Spanish launched a heavy counterattack on the captured trenches at night, but they were badly mauled and forced to retire after losing an estimated 3,000 soldiers. The 71st remained in the trenches for the remainder of the fighting at Santiago, conducting the siege duty.

The Spanish garrison at Santiago surrendered on the 14th of July, having been suffering from famine for over two weeks, while simultaneously watching the U.S. army position it’s imposing siege artillery. The Spanish surrendered some 24,000 troops at Santiago; all of whom were to be transported back to Spain. Upon the Spanish capitulation there was little to do other than see to the health of the men, many who were beginning to contract the mosquito born disease Yellow Fever due to the wet climate and two weeks of stagnation at Santiago. The 71st began to suffer fearful attrition not from the Spanish, but from sickness as Yellow Fever and typhoid took root wherever the troops went. On August 2nd the men of the regiment learned that Spain had agreed to all terms laid down by the U.S. government and that the war was over. The 71st remained in Cuba for a couple weeks more, chafing in the heat to return home. On August 22nd the 71st arrived at Camp Wikoff on Long Island and the men began to leave on furlough.

Upon its return to the states the regiment could only muster 350 of its initial 1,000 men. Those soldiers that were not dead were either on furlough or sick and in hospitals across the country. In October the 71st returned to Camp Black and on November 14th, 1898 the regiment was mustered out.

During its tour of duty the 71st lost several hundred of its members. Of these only around 80 men were killed or wounded in the fight for San Juan Hill, with additional casualties being taken on the road to the hill. Most of the regiment’s losses however came from Yellow Fever and other tropical maladies."

After the horrendous conditions and experiences suffered by William Hughan in Cuba, it is no wonder he turned to alcohol for respite after his return to New York. He died, cold and alone on the streets of New York, only 12 days after being mustered out from his regiment.The letter that he carried from his mother, Elizabeth Hughan, back in Scotland was heartbreaking. She wrote to her only son:
"My dear Wille...be careful when you get your money and do not make a mistake in the spending of it. I think that you have suffered such hardships in earning it that it should make you very cautious, indeed."

I wonder if William visited his Aunt, Margaret West Hughan, and cousins Evelyn, Jessie and Marjorie on his return to New York?(His father, William Hughan, was the brother of Samuel Hughan, father of Jessie Hughan and her sisters) And if so, how would they have received him, this soldier who had fought in a vicious war, whilst they were a family of such extreme pacifists? One hopes that if William did visit his kin they would have made him welcome, no matter what their views on war and those men who fought in them.


Finally, from the "History of the 71st Regiment, New York Volunteers. (Chapter taken from New York and the War with Spain:History of the Empire State Regiments by the New York State Historian, 1903.)":

"The Regiment left New York over 1000 strong, a regiment of magnificent,healthy-looking athletes.It paraded on its return less than 350 men, and of these not fifty who could say they had not been seriously ill or that at the present time they were wholly well.Where were the others? Those that were not dead were almost all sick, either in hospitals all over the country or on furloughs at their homes."

"The 71st Regiment, New York Volunteers, in the war with Spain enlisted promptly,recruited quickly, went to the seat of war rapidly and in a patriotic, devoted spirit, did every duty assigned to it cheerfully,obeyed orders implicitly, fought valiantly,suffered heroically and now retires from active service with becoming modesty, confident that it has served its state and country well".
at June 15, 2010