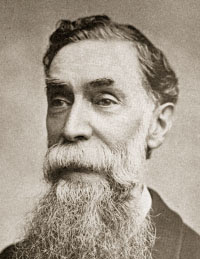 William Hughan was baptised in Kirkmabreck Parish on 14 August, 1806, the second son born to Samuel Hughan and Mary McKie.
Like his brother Peter, William grew up on the Hughan farm at Balhasie, near Creetown, and then moved down into England as a young man. The brothers moved to Stonehouse, in Devonshire, where they were both drapers. Samuel moved back to Scotland several years after the death of his father in 1835, and resumed farming. William, however, remained in Stonehouse, where he married and raised a family of three sons and a daughter.

William Hughan married Margaret Chisholm in 1838, and their first child, Samuel Chisholm Hughan, was born the following year in 1839.
Another son, William James Hughan, followed in February of 1841, then Peter in 1844 and Mary Jessie in 1848.
Because William Hughan and his family lived in England, there are far fewer details to be had about their lives as compared to the family of his brother Peter, who resided mainly in Scotland and allowed me to use the excellent Scotlandspeople site to harvest wonderful information. Still, we can follow the Hughans of East Stonehouse through the census returns, and at least gather a glimpse of their lives:

Two of their children had predeceased them....Mary Jessie Hughan, their only daughter, died in East Stonehouse in 1862, aged just 13. Her brother Peter died the following year in 1863, aged 18.

Of their two remaining sons, Samuel Chisholm and William James, both married, although only Samuel had any issue.
William married first...in 1868 he married Mary Jane Pillow, who had been born in Pimlico, London.This William is famous throughout the world as a Freemason author, historian and expert in general. Known as "W.J.Hughan", he became an apprentice in the drapery trade in his brother Samuel’s business at East Stonehouse at the age of 15. After completing his apprenticeship, he became a warehouseman at a company of haberdashers in Plymouth. William managed to work himself up to become a joint manager of a wholesale cloth warehouse in Truro. At the age of 24 he was the first Master of the new Mark Lodge in Truro. In 1875 he became Past Grand Master Overseer of the order.

William James Hughan died not long after the 1911 census was taken. He died on May 20, 1911, at Torquay, aged 70. His wife, Mary Jane Hughan, passed away the following year.

Again, as with his famous first cousin once removed, Jessie Wallace Hughan, I will not include vast reams of information about William James Hughan and his exploits in this blog. There are gazillions of hits for his name when it is entered into a search engine...I just wanted to put into perspective where it was that he fitted amongst the Hughan familes of Kirkmabreck.

Of his elder brother Samuel Chisholm Hughan, not much is known by me. He married Catherine Ann Stringnell, daughter of Henry Stringnell, in Whitegate, Cheshire on September 18, 1879, at the age of 40.

Samuel Chisholm Hughan died in Devon in 1902, aged 63 years.In the 1911 census, his widow Catherine Hughan and son William were both lodgers at 23 Loveday Road, East Ealing in Middlesex:
Catherine A. Hughan/48/widow/married for 20 years/one child/commercial clerk/born Droxford
William Chisholm Hughan/25/single/born Plymouth
Catherine Hughan died in Brentford, Middlesex, in 1919, aged 67. Her only child, William Chisholm Hughan, married Grace H. Bridge in Brentford, Middlesex, in 1916. They had at least one child- Catherine M.V Hughan was born at Brentford in late 1916.
at June 16, 2010