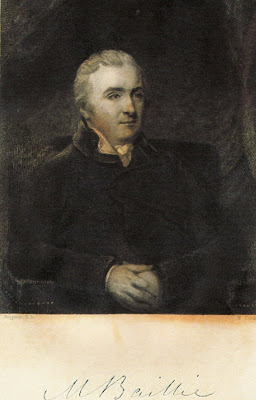 Above: Dr. Matthew Baillie who initially attended Thomas Hughan. His sister was Joanna Baillie, famous writer and correspondent, who in future years would become close friends with Thomas Hughan’s wife, Jean Milligan, and the Milligan sisters.


Robert Batty, of Charlotte Street, Portland Place, London, was doctor and physician to Thomas Hughan. He stated that on the morning of Monday, October 28th,1811, he was sent for by Thomas Hughan, who was represented to him as being unwell.
Sir Walter Farquhar (1738-1819), physician to the Prince of Wales, was also present at the North End, Hampstead, residence, and he and Dr. Batty found Thomas confined to bed with an inflammation in his bowels.
The two doctors met again at the house that evening, with the addition of Dr. Matthew Baillie(1761-1823), physician to King George the Third.
Gathering at North End again on the morning of October 29, the three physicians found Thomas Hughan to be extremely ill. Dr. Batty proposed that if they didn’t find his condition improved by the evening, he would stay with him. At about five o’clock that afternoon the doctors attended Thomas again, and finding him no better Dr. Batty remained in the house to provide constant monitoring of his condition.
Towards the evening, “considering the situation of Thomas Hughan to be very alarming”, Dr. Batty became anxious to ascertain whether his patient had made a will. He asked Thomas if he could write anything for him, and the latter replied “Yes” and asked the doctor to immediately get pen and ink. Having done so, Thomas started to dictate to Robert Batty the document marked “A”
After Thomas had named his executors, Robert Batty observed to him that he hadn’t dealt with his house and furniture, to which Thomas replied “I leave all those to my wife, Mrs Hughan”. These instructions were added and became the concluding part of document ‘A’.
Dr. Batty read the will to Thomas, who understood and approved of it, and they both signed the document. Robert remarked to his patient that he supposed what he had written would do, but as he was unacquainted with the Law it would probably be better if Thomas sent for his solicitor. Thomas consented, and Robert sent a message express to Robert Shaw, Thomas Hughan’s solicitor in London.
Soon afterward, about 8:30 in the evening, Robert Shaw arrived with George Augustus Shaw and was shown the ‘A’ document. After reading it he went upstairs to Thomas Hughan’s bedroom, where he told Thomas that he had omitted the following:
- No disposition of the residue of his property
- He had not revoked his will made in Jamaica
- He had not made provision for the child with which his wife was then pregnant.

Robert Shaw then left the room and a short time later returned with the document marked ‘B’. Slowly, “clause by clause”, the solicitor read the document to Thomas Hughan. Although he never spoke, Robert Shaw swore under oath that Thomas had understood the contents and that “it was evident from his manner that he liked and approved of the same”.
Robert Shaw then consulted with Dr. Batty about the propriety of getting his patient to sign the will, and was told that Thomas was perfectly sensible and had completely understood what the will contained.
The solicitor took the will and a pen to Thomas Hughan’s bedside, and the latter made a motion with his hand as if asking for the pen. George Augustus Shaw was called into the room to witness the proceedings, and he helped Dr. Batty raise Thomas up in his bed and supported him while he tried to sign the document. He took the pen in his hand and made an effort to write his signature but, unable to do so, fell backwards upon the bed.
Robert and George Shaw left the room, and about three minutes later Dr. Batty came out and informed them that Thomas Hughan had died.
Robert Shaw stated in his disposition that he had been intimately acquainted with Thomas Hughan for upwards of twenty years, having become acquainted with him during his residence in the Island of Jamaica, where Thomas Hughan was engaged in merchantile pursuits. Robert Shaw had been engaged with his Co-partners as Thomas Hughan’s solicitors for some time before his death. He also stated that the will alluded to as having been made in Jamaica bore the date 1797, and had been made many years prior to Thomas Hughan’s marriage, which took place at the beginning of 1811. He finally claimed that Thomas Hughan had left behind him Jean Hughan, his lawful widow and relict, and (blank) Hughan, his natural lawful son and only next of kin, born since his death on about October 31st.
The efforts of Dr. Batty to ensure Thomas had sorted out his affairs came to fruition when the will was proved in London on January 20, 1812, by the oath of Jean Hughan, widow and relict and one of the executors.
It was hardly the ideal start to Jean Milligan’s marriage....after only nine months of marriage, her husband was dead and her newly born son would never know his father.

Jean never married again, and took refuge in her close knit and loving family. Of the three Milligan sisters, she was the only one to marry. Her sisters Justina and Mary lived in Cotswold House near Cernes, Gloucestershire, and Jean resided with them for much of the time. It is not known when Jean disposed of her home in Devonshire Place, London, but the house in which she spent the latter half of her life was 33 Grosvenor Place, a huge and majestic home where she lived with son Thomas and later Thomas’s wife and three daughters.
at March 20, 2009