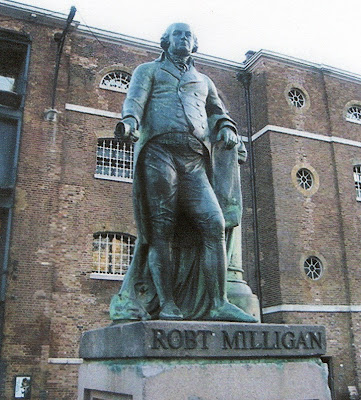 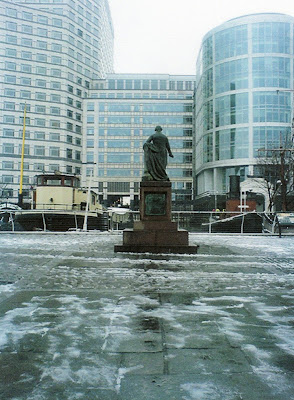 One of Thomas Hughans friends and business associates was a man named Robert Milligan.Robert Milligan (c.1746-1809) was the man responsible for the realisation of the West India Docks. Milligan was a wealthy West India merchant and shipowner, having previously managed his family's Jamaica sugar plantations.Furious and outraged at losses due to theft and delay at London's riverside wharves, Milligan lead a group of powerful businessmen who planned and built the West India Docks. Milligan served as both Deputy Chairman and Chairman of the West India Dock Company.
Robert Milligan lived at Kingstown, Jamaica, from c. 1759 - 1771. He then returned to live in London, although remained a West India merchant up until the time of his death in 1809. The monument pictured above was built on the London Docks to honour Robert Milligan and his achievements.
At the time of Robert Milligan's death, Thomas Hughan was named as one of four executors and guardians of his children. Two years later, in early 1811, 51 year old Thomas Hughan married one of these children- eldest daughter, 29 year old Jean Milligan.
The story of the Milligan family is very interesting, and I will provide a quick rundown on Jean Milligan's parents and siblings after I complete Thomas Hughan's life.

The two years leading up to his marriage had been tough ones personally for Thomas Hughan.He first suffered the loss of his brother Alexander Hughan, soon followed by the death of his mother Margaret Gerran Hughan.That only left two members of his family living-Thomas himself and his spinster sister Jane.
Thomas Hughan married Jean Milligan on February 1, 1811, at Rosslyn House, Hampstead, by special licence.Rosslyn House was the magnificent home of the Milligan family.
Thomas established his new bride in his home at 12 Devonshire Place, London. Looking at images of this street today (2009), it is lined with magnificent six-storey houses, making it easy to picture the grandeur of its nineteenth century glory.
The Hughans also kept their house known as 'Hill House' in Creetown, Kirkmabreck,believed to be the traditional Hughan home, and 'Airds' at Parton near Castle Douglas, Kirkcudbright ( now in Galloway).
Jean must have fallen pregnant almost immediately, because just under nine months later she gave birth to son Thomas under very dramatic circumstances. Towards the end of her confinement her husband had fallen very suddenly and seriously ill. He was residing at North End, Hampstead, and his wife was staying elsewhere (most likely their Devonshire-place London residence) as she was not present during the events that unfolded during the two days it took Thomas Hughan to succumb to his illness.
We are so fortunate that Thomas Hughan had not updated his old will, made in Jamaica in 1797 some 14 years prior to his marriage. None of the circumstances of his illness and death would have been known if it were not for his 1811 will being made on his deathbed, complete with the addition of the details of the occasion as given by three witnesses- his doctor Robert Batty and solicitors Robert and George Augustus Shaw.
In the following blog is the condensed version of events as taken from the oaths made by these three men, and detailed in the document concerning Thomas Hughan’s last will and testament.
at March 19, 2009