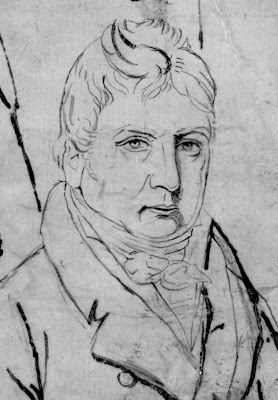 I was delighted to be able to purchase a copy of this portrait and finally be able to put a face to the man I had been researching for so long.If the dates are correct and Henry Bone produced this sketch in 1813, it was created two years after Thomas Hughan's death. I wonder if his widow Jean Milligan Hughan commissioned the portrait for herself and her infant son so he would be able to have an image of the father that he never met?
Thomas Hughan was born in Creetown, parish of Kirkmabreck, Kirkcudbright, Scotland, in c. 1760. His parents were merchant Alexander Hughan and his wife Margaret Gerran. Six more children were born during the next decade, but only three survived to adulthood- Thomas, his sister Jean(later referred to as Jane) and younger brother Alexander.
Thomas was only aged about 11 years when his father Alexander died in 1771. Despite this, his Alexander Hughan named his elder son executor of his will, placing a large responsibility on young shoulders.
Thomas managed to build upon his father's business, and looked further afield to England to further his prospects.He set up business in Liverpool, later joined by his brother Alexander, and from this city became involved in the business of slave trafficking.
Thomas Hughan's involvement with slavery was so great that at one stage he was named high on a list of Britain's most well-known slave traders.Because he was asked to testify before a number of committees in the early 1800s, Thomas Hughan's movements have been able to be traced with some certainty.
For example,when asked in 1807 to testify in front of a committee concerned with American Encroachments on British Rights,the following information was given:
" Mr. Thomas Hughan was called in and examined.
State to the Committee your connections with the British West India Colonies, and the means you have had of acquainting yourself with the west India trade.
Mr.Hughan: I am a West India merchant, connected particularly with the Island of Jamaica, and have been acquainted with its trade for the last twenty years and upwards; I resided in the Island of Jamaica twelve years of that time, and the last ten years in London, and I have had ample opportunity to be well acquainted with west Indian commerce.
Have you had, either as a proprietor, trustee, executor or factor-the accounts of various sugar plantations annually passing through your hands, so as accurately to judge of the whole of the expenses and returns of these plantations?
Mr.Hughan: The accounts of various sugar plantations in the West Indies have passed through my hands, as an agent or a factor, not as a proprietor or in the capacity of executor or trustee."
Source: American Encroachments on British Rights, by Nathaniel Atcheson Esq, 1807.

Taking these stated facts into account, Thomas Hughan started his 'acquaintance' with Jamaica c. 1787, or even a few years earlier.By 1797 he was residing back in London, so the period he spent in Jamaica approximately spanned the years between c. 1787 and 1797. This means that Thomas was aged about 26 or 27 when he first arrived in Jamaica, and in his late thirties when he moved to London.
This time spent in Jamaica becomes important when you consider the fact that Thomas Hughan, prior to his marriage in 1811, had fathered two illegitimate daughters, Jane and Margaret Hughan.Neither child had reached the age of 21 years by 1811 when their father died, so they could not have been born prior to 1790.Thomas didn't return to England to reside until c. 1797, so there is a very good chance that these 'natural' daughters were born in the West Indies.
It appears that Jane and Margaret were acknowledged and financially supported by Thomas Hughan, and I believe that they resided in Edinburgh, Scotland, as this is where they both died and, in Margaret's case, was married.There must have been very little stigma, if any, associated with being the 'natural' daughters of Thomas Hughan, as when Margaret died in 1818 she was freely reported in several Edinburgh journals as being "daughter of the late Thomas Hughan of Airds, Esq, merchant in London". Both the girls' father and their uncle, Alexander Hughan, provided for them in their wills.
at March 16, 2009